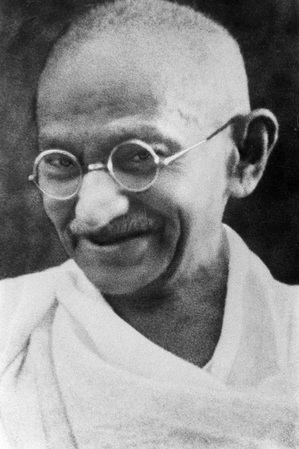 ​The following is a look at the beginnings of the Alliance as remembered in 2004 by Deb Sawyer, who helped found it.

Anniversaries can be a time to reflect on past years, to wonder what lessons we have yet to learn, and to recommit to our deepest values. The fall of 2004 is another celebration of Gandhi’s birth and another election.

The seeds for what would become the Gandhi Alliance for Peace were planted during the 1988 election, when George H. W. Bush beat Dukakis. Dukakis’s platform called for an end to nuclear weapons testing. With his defeat, a small group of Utahns made the commitment to organize a writing campaign, mailing postcards twice a month until nuclear testing ended; that group was called Writing to Stop Nuclear Testing (WSNT). When testing finally ended, WSNT became Writing to Reduce Weapons, which was committed to work for a Comprehensive Nuclear Weapons Test Ban Treaty, to reduce the size of the U.S. military budget and to reduce the number of weapons the U.S. sells or grants to other countries. Gandhi was not part of the picture at that time.

But then in the late summer of 1998, Peace Brigades International (PBI) called Writing to Reduce Weapons, requesting that it organize an event close to October 2nd featuring a PBI speaker. PBI is one of many groups seeking to follow the example of Mahatma Gandhi in using nonviolence in response to conflict and oppression.

The Gandhi Alliance for Peace was incorporated in January 2000, with the mission:
To increase public awareness and understanding of Mahatma Gandhi, his unique role in world history, and his commitment to truth, nonviolence, service and justice;To encourage non-violent resolutions of conflicts among individuals, communities, and nations.