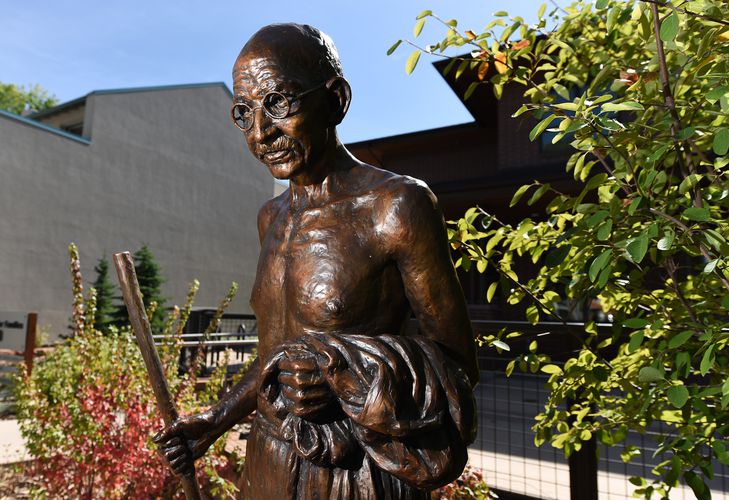 Making of Peacemakers Training
From 2002 to 2007 the Gandhi Alliance for Peace conducted a series of workshops called Making of Peacemakers that trained middle school and high school teachers in the use of an instructional package emphasizing peaceful resolution of conflict.

Land Mine Project
For several years, the Gandhi Alliance for Peace organized fundraisers to support the removal of land mines in Southeast Asia.

Statue of Gandhi
In June 2012, a bronze, life-size statue of Gandhi, commissioned by the Gandhi Alliance for Peace, was unveiled on the corner of 300 East and 300 South at the entrance of Salt Lake City's YWCA campus. The unveiling of the statue, by its renowned sculpture Dennis Smith of Alpine, Utah, was the crowning event of a three-year fundraising endeavor led by Alliance treasurer Boyer Jarvis.

The statue, named Mahatma Gandhi, Apostle of Peace, stands as a symbol of the Alliance's and the YWCA's dedication to promoting peace, justice, and dignity for all.

Collaboration
From time to time, the Alliance cosponsors events with other activist groups to promote mutual objectives.

In 2011, for example, the Alliance, cooperating with the Utah Film Center, mounted a free, open-to-the-public, three-day Gandhi Film Festival screening eight films about Gandhi or inspired by his vision of nonviolent activism.

The Alliance has co-sponsored with the Peace Advocacy Coalition lecture series that have included presentations by a professor of Islamic studies at Oxford University, a fellow at the Institute for Policy Studies in Washington D.C., and the executive director of the Albert Einstein Institute, congresswoman Barbara Lee (the only congressperson to vote against entering the Iraq War), restorative justice activist Fania Davis, and several others.

The Alliance has worked with the Utah Campaign to Abolish Nuclear Weapons (UCAN) to sponsor "Beat the Bomb" rallies marking the International Day of Peace established by the United Nations.

In 2015 the Alliance was one of several organizations sponsoring climate scientist Catharine Hayhoe, one of Time magazine's 2014's most influential people, who spoke at several Utah venues on the need to act now on climate change.