prayer meeting at beach in Mumbai 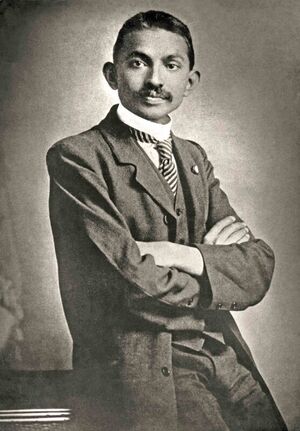 Mohandas Gandhi as a lawyer in South Africa
On October 2, 1869, in the state of Gujarat, India, Mohandas Karamchand Gandhi was born, as we all are, as a tiny baby. By his death he had become known as "Mahatma," or "the great-souled one." He had inspired the world with his nonviolent, love-soaked efforts to gain rights for people of color in South Africa, and to end British occupation of India.

Born into privilege, he had the opportunity to study law in London, and practiced in South Africa. There, the discrimination he endured and saw around him lit in him a fire of passionate activism. Influenced by his Hindu faith, the texts of Islam, Buddhism, and Christianity, and thinkers like Tolstoy, Ruskin, and Thoreau, he envisioned and led a campaign of peaceful resistance for eight years.
In 1914, Gandhi returned to India, which was at the time ruled by the British. There he organized passive resistance campaigns to change unjust laws and win Indian independence.

In one of his most famous acts of resistance, he organized the Salt March to protest a new tax on salt levied by the British. He planned to defy the tax by making salt at the ocean. With followers, he marched from Ahmedabad to Dandhi--240 miles. Along the way, he spoke to and inspired tens of thousands.

By the time they reached the sea, thousands of men and women had joined him. On May 21, 1930, police attacked the protestors with clubs, cracking skulls and breaking bones. At no time did anyone offer resistance. These protesters had staked their lives on Gandhi's teachings Satyagraha, or nonviolent resistance.
This violence by authorities and the peaceful response of the people turned public opinion throughout the world against the British occupation.

However, Gandhi taught that true Indian independence couldn't be won without Swaraj, that is, the moral independence of each individual and community.

He taught that violence could never achieve high aims.

He taught that the caste system and treatment of "untouchables" were immoral.

He taught and demonstrated an absolute commitment to truth and forthrightness in dealing with opponents. For that matter, he taught and practiced love for his opponents.

He repeatedly and urgently pled with Hindus and Muslims to live in peace.

He struggled to prevent the partition of India into a Muslim state (Pakistan) and a Hindu state (India). Of course, he failed. That tragic splitting of India led to two nations in bitter opposition, each stockpiling nuclear weapons out of fear of the other.

Gandhi meeting with Muslim refugees forced to move to Pakistan
Sadly, that kind of animosity still exists, and it existed in 1948, when a rabid Hindu nationalist, upset over Gandhi's kindness to Muslims, shot him to death.

The nation--and the world--mourned.  Over a million people joined a 5-mile-long funeral procession for Gandhi. Another million stood along the streets as his bier passed. Gandhi's funeral pyre
Gandhi died at the hand of a violent man and a violent group mindset.

But his vision, teachings, and methods live on whenever people choose to love, respect opponents, and implement strategic nonviolence--even when confronted with hatred, evil, injustice, and violence.